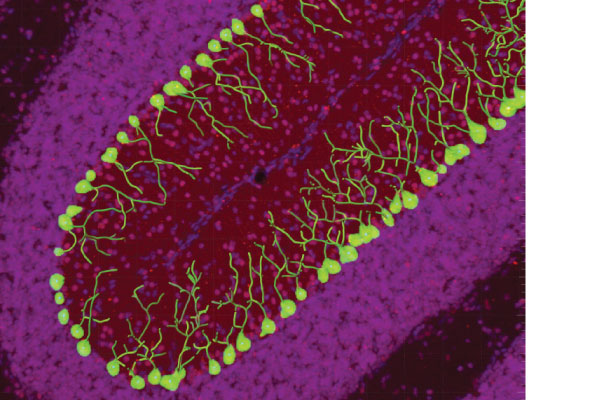 Reducing levels of the Msk1/2 kinase decreases the amount of ataxin-1 and improves
survival of Purkinje neurons (green) in mouse models of SCA1.
image courtesy of the Zoghbi lab

Dialing Back a Disease
by Nicole Kresge

A cellular signaling pathway affects the levels of a protein that kills nerve cells.

More is not always better; it can be deadly. A neurodegenerative disease called spinocerebellar ataxia type 1 (SCA1) is caused by too much of a mutant version of a protein called ataxin-1. A recent discovery from a team led by Huda Zoghbi, an HHMI investigator at Baylor College of Medicine, hints at a way to decrease ataxin-1 levels and perhaps reduce the disease’s severity.

SCA1 occurs when a specific stretch of three nucleotides—the molecules that make up DNA—is repeated in the ATAXIN-1 gene too many times. The altered gene produces a large, misshapen protein that can’t interact normally with its protein partners. Instead, the abnormal protein piles up in nerve cells, eventually killing them. As a result, the person loses coordination and balance and experiences difficulty speaking, breathing, and swallowing.

Although there is no treatment or cure for the disease, Zoghbi and her colleagues previously discovered that by decreasing levels of ataxin-1 in a mouse model of SCA1, they could reduce disease symptoms in the animals. With funding from an HHMI Collaborative Innovation Award, Zoghbi assembled a team of researchers with a collective goal: to speed up screening for genes and proteins that could be targeted with drugs to achieve the same effects.

The team focused on about 600 genes in both human nerve cells and fruit fly SCA1 models. The genes encode kinases—enzymes that attach phosphate groups to proteins and are often easily blocked with drugs. As they reported June 20, 2013, in Nature, 10 of the genes influenced ataxin-1 levels in both systems. All of them were part of a cell signaling pathway called RAS-MAPK-MSK1. When the pathway was inhibited in mouse models of SCA1, ataxin-1 levels went down and neural damage was limited.

Zoghbi’s team is searching for other genes that affect ataxin-1 levels as well. “We want to look for other relevant pathways now, because if we can find two or three pathways that are important in SCA1 and inhibit all of them just a little bit, we may be able to avoid toxicity,” she explains.