The View from Here
by Ivan Amato

Unbounded creativity—and powerful computers—make possible the latest devices designed to peer into the deepest recesses of organs and cells.

Photography has come a long way in the two decades since digital cameras all but relegated picture taking on film to a chapter in the history book of technology. Image-processing tools like Photoshop and mobile apps like Instagram have turned anyone with aspirations into a postproduction touch-up artist. Revolutionary, yes. But it’s nothing compared to the evolutionary explosion in imaging techniques that the digital crossover has unleashed in laboratories.

“Every major advance in imaging technology precipitates a new round of breakthroughs in cell biology,” says structural biologist Grant Jensen, an HHMI investigator at the California Institute of Technology. Seeing is the quickest route to understanding, says Jensen, who has been using a technique similar to a computed tomography (CT) scan to render visible the molecular machinery inside cells in three-dimensional splendor.

By combining advanced microscopes, new-generation cameras, innovative methods of acquiring raw data, and computational processing of the data, HHMI scientists and others are creating unprecedented depictions of biology’s magnificent marriage of form and function. Think of the leaps from still photography to movies, from black-and-white to color, and from silent to sound, and you begin to get a sense of how much more of life these pumped-up imaging tools are allowing researchers to see.

Neuroscientist Mark Schnitzer, an HHMI investigator at Stanford University, has been working with colleagues to extend the reach of their microscopes to watch ensembles of cells deep inside the brains of live, mobile animals. Schnitzer has been thinking hard about the evolution of imaging in biology. As he sees it, there has been a three-phase progression since the 17th century when the likes of Robert Hooke in England and Antonie van Leeuwenhoek in Holland first ushered microscopy into scientific investigations.

That first phase, based on what scientists could see in real time with their eyes peering through a microscope, lasted for centuries. First they recorded what they saw with hand drawings and then later with photographs. Their recorded images, says Schnitzer, were essentially data in pictorial form.

With phase 2 and the advent of digital cameras and laser-scanning techniques over the past few decades, “the image becomes a set of measurements,” says Schnitzer. Each pixel has associated with it digital values of light intensity, color, or some other parameter. More than just a pictorial rendition of what is visible, he notes, “the image becomes a numerical representation of reality.”

The camera’s automatic digital accounting of the images’ characteristics opened up a world of computer-assisted analyses of what once were only pictures. It also opened options for novel data syntheses, among them visual reconstructions of three-dimensional biological structures from two-dimensional images of consecutive “slices” of a biological sample.

“The third phase of biological imaging is where things have gotten really interesting,” Schnitzer says, adding that the ready availability of powerful computers is as much the driver here as are the microscopes and cameras. Here, he notes, the meaning of the raw data is hard to interpret by eye until a computer processes and reconstructs it into, say, a two- or three-dimensional view with discernible cellular or molecular features. This is akin to the way today’s high-end sonography equipment can reconstruct images of a fetus from sound echoing from it, or the way magnetic resonance imaging machines convert electromagnetic signals from molecules in the body into portraits of internal anatomy. It takes a lot of computing power to turn those raw signals into medically useful pictures.

Jensen has been pushing this third phase of imaging into the molecular domain. He combines a freeze-prep step—designed to keep water inside cells from evaporating when inside an electron microscope’s vacuum sample chamber—with a multiple-view reconstruction process. The process yields enough 3D clarity, he says, that the resulting images alone can provide sufficient evidence to choose between competing theories about roles played by otherwise mysterious molecular complexes. One example he likes to talk about is the syringe-like mechanism of a molecular defense complex in bacteria whose action had been a matter of speculation.

Meanwhile, Anthony Leonardo, a group leader at Janelia Farm, has been applying a variety of sometimes Hollywood-esque techniques to help answer questions about whole organisms. Here’s one of his questions: How do dragonflies deploy brain-encoded “guidance rules” to execute the acrobatic, high-speed task of capturing prey during flight? In time, he will map the “microstructure of behavior”—among them, details of how the hunting dragonfly orients its head and body—captured in the data from video recordings of the insects’ less-visible neurophysiological and muscular control system.

In a nearby lab, Janelia Farm fellow Kristin Branson has been ramping up camera- and computer-based observations of fly behavior to an industrial scale. Putting her computer science background to work, she transformed what amounts to a surveillance camera system into an automatic behavior detector that she and co-workers have used to spy on 300,000 genetically diverse fruit flies. The scientists teach the computers to associate specific fly behaviors with particular patterns of data, which are then embedded within the image files recorded by the cameras. Rather than having someone perform the time-consuming task of making direct observations of flies, one by one, this automatic machine-based approach sums high-throughput observations on aggression and courtship, among other behaviors. The hope is that the quantitative leap in data gathering and analysis will lead to a qualitative leap in understanding how genes orchestrate nervous systems and related behaviors.

Fly Me Through the Cell

Schnitzer is interested in virtual tours of inaccessible places. His group has been developing techniques for simultaneously imaging hundreds of brain cells in live mice to tease out the neural circuitry in the cerebellar cortex that underlies learning and memory. He and co-workers also have developed a microendoscopy technique that enables them to apply fluorescence microscopy to deep-brain structures that had been inaccessible to conventional microscopy, at least in living and behaving mice. Schnitzer’s team mounts tiny microscopes that weigh a fraction of an ounce onto the heads of mice. Central to these devices are micro-optical needles with a lens that can magnify like a typical microscope’s much larger, curved lens—needles that can penetrate deep into the brain and image living cells and tissue there. 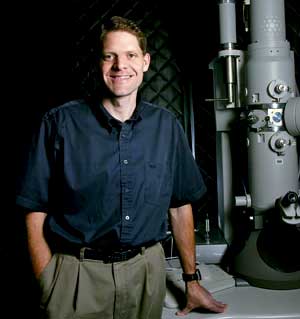 And in a project that complements Branson’s, Schnitzer aims to develop instrumentation for massively parallel brain imaging of up to 100 fruit flies at once—both normal flies and those with genetically induced changes. He aims to learn how neural circuits associated with those genetic variations produce and control specific animal behaviors.

Jensen is pushing computational reconstruction of reality in pursuit of scientific understanding in yet another direction. He and visualization experts in his laboratory have been transforming their electron cryotomography data into mechanism-revealing animations. Says Jensen, “If a picture is worth a thousand words, then an animation is worth a million.”

“We have done movies where we fly into cells and look at things from different points of view,” says Jensen. “We have tried to illustrate mechanisms of how things work inside cells.” He believes animations can be powerful educational tools. “Some people still don’t believe that HIV is the causative agent of AIDS, for instance, so they decline treatments that could help them,” says Jensen. “Our animations of HIV’s molecular transformations will help them understand that we are not making this up.”

As researchers move through the early part of Schnitzer’s third phase of biological imaging, Jensen is already imagining what might be a fourth phase. “The ultimate would be a microscope where you could see down to individual atoms while they were being arranged and rearranged inside a cell in its living state,” Jensen muses. “If you could develop an imaging tool like that, the study of cell biology would be all but over,” Jensen says, noting, however, that it would take a century or more to digest such a comprehensive portrait of life. An outlandish vision for revealing biology’s deepest structures and mechanisms, to be sure, but that is just the sort of thinking it takes to unveil molecular biology in all of its elaborate minutiae.

Keeping Up with Embryogenesis
News