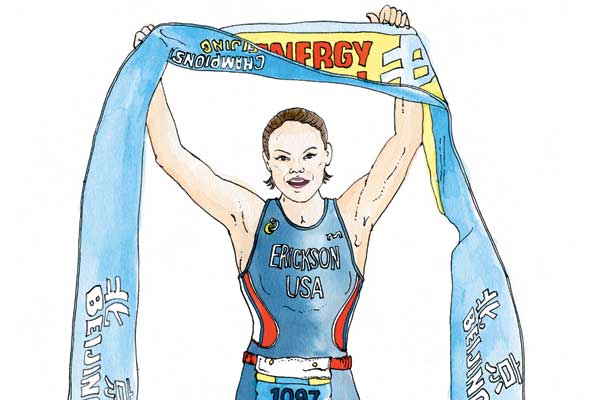 When Erika Erickson’s California lab mates heard that she was just back from a triathlon competition in Beijing—where she earned gold in her age group—most were shocked. They knew she worked unusual hours for a graduate student, with lots of very early mornings and late nights, but they had no idea how she was spending her daytime hours.

Her graduate adviser, HHMI-GBMF investigator Krishna K. Niyogi, knew what she was up to but can see how it might have been a surprise to others. “She’s pretty low-key about it,” he says. “She’ll really only tell you how it went if you ask her.”

Erickson ran track and swam competitively as an undergraduate at the Massachusetts Institute of Technology but hadn’t tried triathlons until she moved to the University of California, Berkeley, for graduate study in plant biology.

Two and a half years later, she has earned professional ranking in the sport, which means she can compete for prizes of $5,000 or more in events sanctioned by the sport’s main association, USA Triathlon. She trains 15 to 25 hours per week and fits in her research around workouts. “I don’t keep standard hours,” she laughs, saying it’s understandable that her lab mates were mystified by her trek to China. “And I don’t talk about my personal life too often in lab; I don’t want to give the impression that science is my second priority.”

Along with training and travel to races, Erickson makes sure that her research on the structure and function of proteins involved in photosynthesis progresses at a reasonable pace. She says the dual focus gives her a bit of stability. “If I have a bad week in lab, my training can balance that out. Or if I have a bad week racing, a good week in lab can make up for it.”

In her first professional race, the June 2 Pan American Cup in Dallas, her focus paid off. She placed 8th on the 1,500-meter swim, 40-kilometer bike, 10-kilometer run. Her time of 2:19:03 was just 8 minutes, 41 seconds behind that of the leader, Laura Bennett, who represented the U.S. at the Olympics this summer.

“The race went well overall, but the conditions were incredibly challenging—95 degrees and windy,” she says. And her competitors were very different from her usual running mates.

“People weren’t at the Dallas race just to see if they could finish or just to have fun.” They were there for national pride, to win money and points in the ranking system. Those goals, she says, “bring an entirely different set of emotional responses to a race. I was really intimidated by my competitors. But I had fun and learned a lot.”

As for her lab mates, their only firsthand experience with Erickson’s racing talents came from a 2-mile run around the Lawrence Berkeley National Laboratory. Niyogi offered to buy lunch for anyone in the lab who would participate with him or watch the race. “Several of us went, and Erika was just way, way out in front of all of us,” he says laughing. “She won the women’s division. I don’t think anybody was too surprised.”