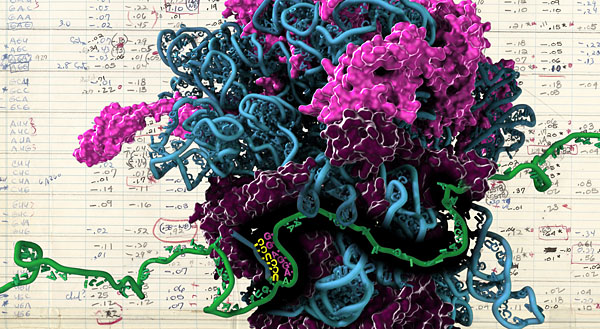 A rendering of the high resolution structure of the ribosome sits on top of a copy of the original
lab notes recording the deciphering of the genetic code.
Illustration by Dale Muzzey

Same But Not Equal
by Ingfei Chen

A code within the genetic code explains why identical proteins are produced at varying speeds.

Hanging on Jonathan Weissman’s office wall is a treasure from scientific history: a rare copy of the 1965 lab book notes—with corrections, asterisks, and numbers circled in red—documenting the deciphering of the genetic code. Penned by the late Nobel laureate Marshall Nirenberg and his team, the notes established that triplets of genetic “letters” map to the 20 different amino acids in proteins.

Lately, Weissman has been making some groundbreaking notes of his own. Nirenberg would no doubt find them fascinating, as the two became close before the biochemist passed away in 2010. Weissman’s work is revealing another layer of nuanced meaning within the genetic language that directs cellular protein production—a code within “The Code.”

After DNA in a gene is transcribed into messenger RNA (mRNA), molecular machines called ribosomes cruise along and read the mRNA strand. Each triplet of letters in its genetic sequence is known as a codon. By stringing together specific amino acids corresponding to those codons, the ribosomes manufacture proteins. Nirenberg had discovered that a given amino acid can be made from several different codons, like synonyms for the same word.

But why would nature devise several ways of saying the same thing? That question has largely remained a mystery in the half-century since Nirenberg’s seminal work. As biologists later sequenced genes in bacteria and other organisms, they saw that some synonymous codons were used far more commonly than others—like a person always expressing hunger by stating, “I’m famished” instead of “I’m hungry.” Some subtle, yet-undiscerned meaning must explain these striking codon preferences.

“There was an aspect of information in how genes were being encoded that we didn’t understand,” says Weissman, an HHMI investigator at the University of California, San Francisco. A big part of the answer, he found, has to do with speed.

Researchers learned in the 1980s that swapping one synonymous codon for another in an mRNA message could change how fast a cell made the same exact protein. That implied that ribosomes could slow down or speed up their protein synthesis. But the mechanism controlling that process was unclear. Now, in a study published in Nature on April 26, 2012, postdoctoral fellow Gene-Wei Li, graduate student Eugene Oh, and Weissman show that in bacteria, protein synthesis temporarily pauses at certain mRNA sequences—because the ribosome gets stuck on them.

The experiments used ribosome profiling, a technique Weissman’s group first published in 2009. “It lets us look at this process of how proteins are being made with a precision that’s completely unprecedented” in the living cell, Weissman says.

The method starts with a long-known trick: Take a cell, stop its protein production using a chemical or flash freezing, break it open, and add an enzyme that digests its mRNAs. What remains are just the short snippets that were actively being read and protected inside the ribosomes. Then, by using new, astonishingly fast sequencing technology to decode all these ribosome “footprints” across the entire cell, Weissman says, you can identify the piece of mRNA each ribosome was scanning and the amino acid it was handling. Counting those footprints in a computational analysis gives an in-depth reconstruction of which proteins were being made from exactly which mRNA messages, and in what quantities.

The new technique uncovers details about protein production that had been technologically out of reach. To grasp how cells function or run awry, scientists would ideally like to directly monitor their proteins, but that’s technically tough to do. The best proxy has been to measure amounts of different protein-coding mRNAs in the cell by using existing microarray tools; those techniques, however, can’t identify which mRNA messages actually get converted into proteins. Because ribosome profiling goes a step further and quantifies that missing information with a massive amount of data, it represents “a really major advance that will become widely used,” says geneticist and ribosome expert John F. Atkins of University College Cork in Ireland.

The Nature study of ribosome pausing is “a nice example” of the technique’s power, Atkins says. Weissman’s team scanned the mRNAs in bacterial cells, looking for all the places where ribosome footprints pile up, like in a traffic jam. Their computational analysis found “a lot more pauses than people expected,” Li says—occurring at hundreds to thousands of short mRNA sequences.

Those short stretches all shared a similarity to the so-called Shine-Dalgarno motif, found in many bacteria. It’s a special sequence that the ribosome recognizes and binds to before it starts reading a protein-coding message just downstream. But the message itself can also include consecutive codons that together form a sequence that is Shine-Dalgarno-like and which had been known in a few specialized cases to cause pausing. Weissman’s team demonstrated that these Shine-Dalgarno look-alikes are the global mechanism behind pauses. “They were sort of sticking like Velcro to the ribosome and slowing things down,” Weissman says.

The pausing mechanism helps to explain why nature evolved genomes to have different preferences for different codon synonyms: they confer various advantages or disadvantages for protein production. For example, the Weissman team’s analysis found that bacterial genomes contain relatively few of the pause-inducing codons, Li says. That is because the bugs evolved to grow fast, which requires rapidly churning out proteins. However, pauses are sometimes desirable for key purposes, such as to regulate protein synthesis and, possibly, to let an elongating protein undergo partial folding, the researchers say.

Weissman began investigating protein production only five years ago, when he decided to develop ribosome profiling in part to tackle a question about protein-folding, then his main career focus. His father, Sherman, a prominent Yale University geneticist, was a great source of advice during the shift, both on big-picture strategizing and on the nuts and bolts of using superfast next-generation DNA sequencers.

As Weissman read up on the intricacies of ribosomes, another exceptional sounding board was Marshall Nirenberg, who late in life married Weissman’s mother, Myrna, in 2005. That’s how Weissman ended up with one of the six existing copies of Nirenberg’s genetic code notes. (The originals are at the National Library of Medicine.) Although the Nobel laureate had long ago switched to neurobiology research, he told Weissman that he had been grappling with questions about codon synonyms and ribosome reading speeds from the very beginning.

“That gave me a context and a sense of the importance of the problem,” Weissman says—and motivated him to apply his profiling technique to finding answers. The method could have a far broader impact on molecular biology research than just for protein folding studies, he realized.

Indeed, from both his superstar advisors, Weissman says he learned a pivotal lesson: new scientific tools are valuable not just for making research faster or easier but also for potentially opening the door to fundamental, game-changing discoveries. The genetic code notes on his wall remind him of that every day. They are “an inspiration to work on problems that are broad and basic and that can touch a lot of different fields,” he says.