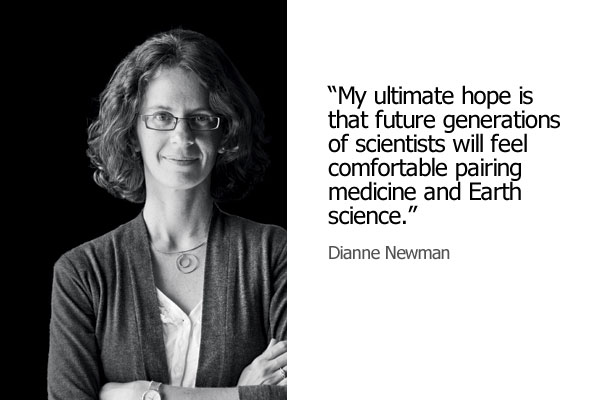 Medical researchers should seize the tools of geochemistry.

Medical microbiologists, whether studying tuberculosis or cystic fibrosis, often ignore the chemical environment of the tissues in which microbes naturally thrive. Dianne Newman argues that geobiologists like herself—who study how microbes have coevolved with the earth—have tools that could be applied to the medical sciences.

During a sabbatical at the University of Oxford last fall, I spent hours in a beautiful 16th-century library. The shelves included headings in Latin denoting the subject of the volumes in each row. One day, I did a double take at a heading that paired two fields rarely discussed together: MEDICINA & HIST. NAT., or medicine and natural history.

This pairing makes perfect sense. Both Earth and the human body are complex ecosystems that depend on coevolution, where life impacts the chemical and physical properties of the environment, and the environment, in turn, feeds back into life’s evolutionary adaptations. And for both, it is impossible to do controlled experiments on the whole. Instead, we must perform creative but imperfect analog experiments or make careful measurements of the natural system.

Experimental Earth scientists, unable to reproduce the complexity of the natural world in a lab, have focused their efforts on developing analytically dazzling ways to measure dynamic environments. For example, geochemists have dated Earth’s age by measuring radioactive isotopes of lead in meteorites and tracked the rise of carbon dioxide in the atmosphere by analyzing trapped bubbles in ancient ice cores. In my lab, we are collaborating with organic geochemists to make sense of molecular fossils from bacteria in billion-year-old sedimentary rocks.

Although they share an interest in microorganisms, medical and environmental microbiologists have separate scientific cultures: they don’t typically attend the same conferences or publish in the same journals. As a consequence, we know shockingly little about the chemistry of the places in the body where microorganisms reside.

Yet, the same methods geochemists apply to sediments and ice cores can be tweaked for cells, tissues, and organs.

Take the area of infectious disease. Medical researchers typically culture bacteria after isolating them from their natural microenvironments. While these scientists are adept at identifying genes, proteins, and pathways involved in lab models of disease, whether their findings extend beyond their specific model system is not always clear. What’s more, most pathogen studies have focused on the microbes’ early rapid-growth stages, even though that represents only a fraction of their life in the human host. Partly due to these artificial experiments, antibiotics that work on organisms in the lab often fail in the clinic.

So, what can geobiology offer the study of infectious disease? To give just one example, my colleague Victoria Orphan combines fluorescence in situ hybridization and secondary ion mass spectrometry to study slow-growing bacterial populations in methane seeps on the ocean’s floor. These populations cannot yet be cultured in the lab, so she learns about their metabolic activities by measuring their RNA and isotopic composition. The same approach could be used to study the metabolism of slow-growing pathogens inhabiting the mucus-filled lungs of patients with cystic fibrosis (CF). By understanding the chemical composition of the mucus in space and time, and how the organisms are coevolving with their environment, we could potentially devise better ways to disrupt the microbes in their natural niches.

Geobiologists have much to learn from the mechanistic approaches taken by medical microbiologists, as well. For example, a major question in Earth history is, when did oxygenic photosynthesis arise? Although geochemists have uncovered a wealth of molecular fossils spanning vast time periods, they are limited in their ability to interpret them. By studying the functions of their lipid counterparts in living cells using the tools of molecular and cellular biology, geobiologists could gain insight into the fossils’ evolutionary significance.

Building bridges across these two scientific cultures will take more than the buy-in of a few research labs. These ideas should germinate in college and graduate school, when budding researchers are most open-minded. One of my graduate students, HHMI international student research fellow Sebastian Kopf, is using the isotope-measuring techniques he learned as a geology student in Germany and at Massachusetts Institute of Technology to measure bacterial growth rate in sputum samples from cystic fibrosis patients. While I encouraged Sebastian to pick the CF lung as his “field site,” his strategy to study the microbial community in this environment is a product of his own creativity and training in the geosciences.

My ultimate hope is that future generations of scientists will feel comfortable pairing medicine and Earth science—just like the builders of that library in the 16th century.

Dianne Newman is an HHMI investigator at the California Institute of Technology.