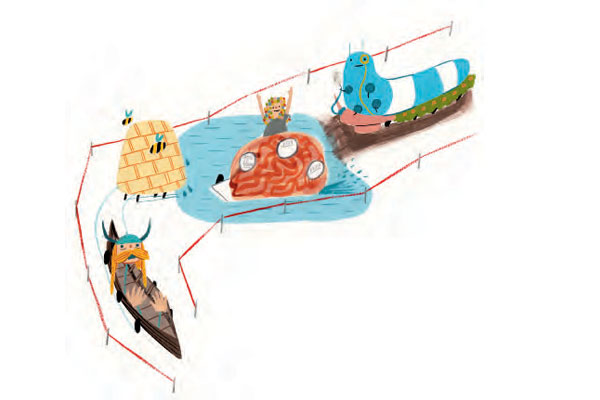 Sink or Swim
by Sarah Goforth

At dusk on May 5, 2011, a dozen Janelia Farm scientists and staff gathered at a remote corner of the 689-acre campus to set their handcrafted amphibious vehicle on its maiden voyage. They needed to know if it was ready for the annual Kinetic Sculpture Race in Baltimore, Maryland.

The vehicle—a hulking aluminum chassis with 32-inch all-terrain tires, powered by five recumbent pedaling stations at the front and rear—did not look like something that would float. But its riders proved otherwise, pedaling confidently downhill and into the murky water. The spectators, most of whom had a hand in the vehicle’s design and construction, cheered.

“It felt like sliding on glass,” recalls Jason Osborne, an instrument design specialist at Janelia Farm for whom the test was especially rewarding. A year earlier, he had attended the annual race of human-powered art projects, sponsored by Baltimore’s American Visionary Art Museum. Captivated by the participants’ creativity (a 15-foot-tall pink poodle dominated the day) and the spirit of the event (official rules include a “mandatory fun regulation”), he came to work the next Monday with a mission: to recruit a team and enter the following year.

The Kinetic Sculpture Race is something of an anti-race. Teams must cross 15 miles of highway, water, mud, and sand on human-powered vehicles in and around Baltimore’s inner harbor. The grand prize goes to the team that finishes in the middle, and rule-breakers escape penalty with bribes.

Beyond that playfulness is a serious mission—to honor collaboration, creativity, and community. Osborne submitted a proposal and recruited a core team of more than two dozen people.

They solicited ideas (“Should it be a fly? Should it be a rat? Should it be a fly chasing a rat?” recalls neuroscientist Roian Egnor) and then settled on the closest thing to a common denominator at Janelia Farm: the brain. By January they had a design, and by March, a shell. Ultimately, more than 100 scientists, students, and administrative and operational staff contributed ideas and labor. They called themselves the Lobe Trotters.

On race day, bystanders peered into the brain’s cubbyhole-like “portals” each containing artwork and found objects depicting a state of mind such as fear, absent-mindedness, and addiction. Postdoctoral researcher (and race-day DJ) Andy Seeds was stationed inside the brain to run a music and light show.

At the starting bell, costumed teams dashed to their vehicles, among them a monocled blue caterpillar, a beehive, a Viking ship, and, the Janelia team’s brain. Some vehicles broke down immediately, creating a traffic jam that “probably didn’t matter because our vehicle was rather slow,” confesses mechanical engineer Brian Coop. With five riders pedaling at full capacity, the brain’s max speed was two miles per hour. Then came the hill … and a broken chain.

“Then we were the traffic jam,” admits Coop.

By the time they reached the water challenge, the Lobe Trotters were in last place. But once they rolled down the ramp and into Baltimore’s inner harbor, their secret weapon—125 empty illy coffee cans hidden inside the chassis for flotation—prevailed. Having seen a number of vehicles falter, sink, or simply drift away, the massive crowd roared.

In the end, the Lobe Trotters took home the Worst Honorable Mention award, in recognition of a tortoise-like pace on land but a flawless finish in the water. With new ideas already bubbling to the surface, they might not be able to resist doing it again.