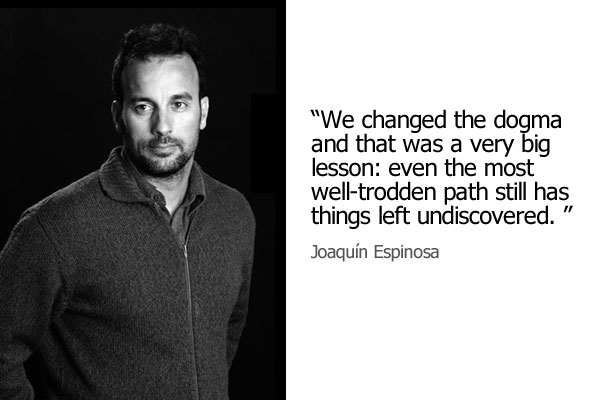 Sometimes taking a step back can move science forward.

Joaquín Espinosa entered the P53 field through a side door, and his fresh take led to important discoveries. As the HHMI Early Career Scientist from the University Of Colorado At Boulder has plunged deeper into the study of this long-established tumor suppressor, he’s continued this open-minded, outsider’s approach, and he’s instilling it in his students.

How did you end up studying p53?

Serendipity. I have a long-standing interest in gene expression control. I did my Ph.D. dissertation at the University of Buenos Aires on gene expression in a trypanosome that causes Chagas disease. The disease is important in South America, but when I came to the United States I needed to find a new study system because no one here was really focusing on Chagas. To study gene expression control during a postdoctoral fellowship at the Salk Institute, I needed a transcription factor for my novel experimental system. p53 was the first one that came to mind. Even though it was discovered more than 25 years ago, and many more tumor suppressor genes have been found since, p53 remains the big one. It’s mutated in about 50 percent of tumors.

I soon realized that I’d gotten myself into a very crowded field. If you do a literature search of p53, more than 50,000 papers come up. But I learned that there’s still a lot we don’t know. In fact, our first experiment produced a result that was contrary to existing dogma.

What was that dogma?

That p53, the protein, could not bind to DNA on its own unless chemically modified. Our experiment showed that p53 is not regulated that way—it was an artifact of the assay people were using. We decided to use an assay that would better mimic what happens in the cell nucleus, and we found that p53 bound to DNA beautifully by itself. We changed the dogma and that was a very big lesson: even the most well-trodden path still has things left undiscovered. I try to instill this idea in my students, because they can feel overwhelmed by the amount of literature on p53.

So it’s the way you look at p53 that’s made the difference?

We usually don’t analyze the p53 molecule itself. Our approach has been to step away from p53-centric approaches and take a more holistic view. If you focus on p53 too much, it’s easy to miss the bigger picture. So we’ve stepped back and said that p53 is like an ace of spades in a deck of 52—depending on which card you play it with, you can get different hands, different games.

The biological effect of p53 may be influenced very strongly by the activity of genes and proteins acting in seemingly unrelated pathways. When you start learning more, you find that what seemed like a linear progression of interactions is more like a three-dimensional web of interactions. We don’t talk about the p53 pathway any more, we now talk about the p53 network. You need to step back from the p53 molecule itself, lest you miss the forest for the trees.

How are you investigating these complex interactions?

We have set up the first facility in Colorado to perform genetic screens in human and mouse cells. Now we can interrogate the function of every gene in the genome as it relates to p53. You couldn’t do that 5 years ago, but now we can.

p53 is a tumor suppressor, and sometimes it will induce programmed cell death in cells on their way to becoming cancerous. However, many cell types are somewhat refractory to the killing effects of p53. And now we’re saying that maybe the key to understanding why one cell dies in response to p53 activation and another doesn’t is not in p53 itself; it’s not even in a binding partner. Maybe it is in some molecule in an unrelated pathway that somehow governs or influences how cells react to p53 activation.

Already we have confirmed that there are strong modulators of p53 activity that are not directly bound to it or don’t affect the p53 molecule itself. We see this phenomenon in cancer biology across the board—that looking at single genes and single pathways is not that informative.

Where do you see this leading?

Toward personalized medicine, where a person with cancer will walk into the clinic and before doctors prescribe any medicine, they’ll study the tumor at the molecular level. Then they'll come up with a customized drug cocktail that reverses the genetic imbalance driving the tumor. Two patients with seemingly identical tumors may receive very different cocktails of drugs, because the combinations of mutations driving their tumors are not the same.

We hope our p53 research will contribute to that vision. Twenty years from now, when I look back, I would like to say that our research had an impact on patient care. I’m very optimistic.

Joaquín Espinosa is a molecular biologist at the University of Colorado at Boulder.