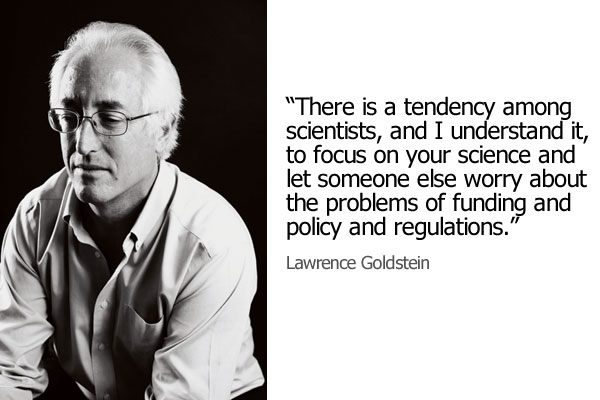 Do what it takes to communicate the facts.

A long-time and vocal champion of science’s value to society, Lawrence Goldstein, an HHMI investigator at the University of California, San Diego, is reaching out beyond policymakers in an unorthodox way. With the same publisher that taught millions how to plan a budget wedding, do a 15-minute workout, and bake bread, he’s co-written Stem Cells for Dummies.

There is a tendency among scientists, and I understand it, to focus on your science and let someone else worry about the problems of funding and policy and regulations. But the scientists know what we know and don’t know, what are reasonable judgments, and how good the data are. If those perspectives don’t inform political and public debates, bad things for science can happen.

In the early 1990s, I spent time in Washington talking to legislators about how research into the detailed workings of cells brings value to society, from the blue-sky, understand-the-world perspective and also from the perspective of practical applications. When Jamie Thomson [of the University of Wisconsin–Madison] announced he’d established the first line of human embryonic cells in 1998, I became a go-to person to discuss how to balance issues of law, ethics, scientific freedom, and scientific opportunity.

Early last year, a literary agent asked me to participate in a stem cell book for the public. I saw it as a new opportunity to use and extend the communications skills I had been developing in my public policy work. When I found out it was a Stem Cells for Dummies project, I worried that the “For Dummies” part might be a little undignified. Would it be bad for my reputation as a serious scientist? Would it be bad for my institution’s credibility? I consulted trusted friends and colleagues and they all told me it was a great idea and that I should do it.

The agent, Barb Doyen, hooked me up with a professional writer, Meg Schneider, who is smart, writes well, and has done other For Dummies books. We worked entirely by phone and e-mail. We never met in person.

For each chapter, we prepared a detailed outline. I would do the reading I needed to bring myself up to industry standard on the topic. Then I dictated into a recorder the content and structure so that a smart, non-scientifically trained journalist like Meg could convert my words into the For Dummies style prose. Meg would send me her work and I would revise it. We would go back and forth. I sent every chapter to people who knew more than me about the topic to make sure we hadn’t done anything terrible. It was an efficient process. The book, with its 22 chapters and almost 350 pages, took us about six months to write.

The book is filled with analogies and inviting stories that I’ve used to present complicated scientific ideas during my years of teaching and speaking to nonscientific audiences. An early example in the book likens different organisms—like fruit flies, mice, and people—to different motorized vehicles as a way to explain that, despite differences in details, these living things share many of the same basic mechanisms and parts.

Another one I like: “In plants, stems are the center of plant growth, giving rise to leaves, flowers, and fruit. In animals, stem cells are the unique cells that give rise to other types of the body’s cells, such as skin, blood, and nerve cells.” (Although in the spirit of good collaboration, neither Meg nor I remembers which of us came up with this one.)

The work of Dummies’ resident cartoonist Rich Tennant also helped with the challenge of communicating basic aspects of science and technology. In one, he makes the point that stem cell research doesn’t quickly translate into medical treatments. A bunch of funny looking bald guys are in a lab. The one in the middle is chatting with a woman. The caption reads: “Believe me, if there were an easy stem cell fix for baldness, our team would have found it by now.”

The book has gotten a lot of good press coverage for me, and by extension for the university, and for the cause of serious and rigorous science. Books like Stem Cells for Dummies can help people make their own decisions about the societal value and moral status of stem cell research based on their own views but informed by accurate information.

Larry Goldstein is director of the Stem Cell Research Program at the University of California, San Diego.