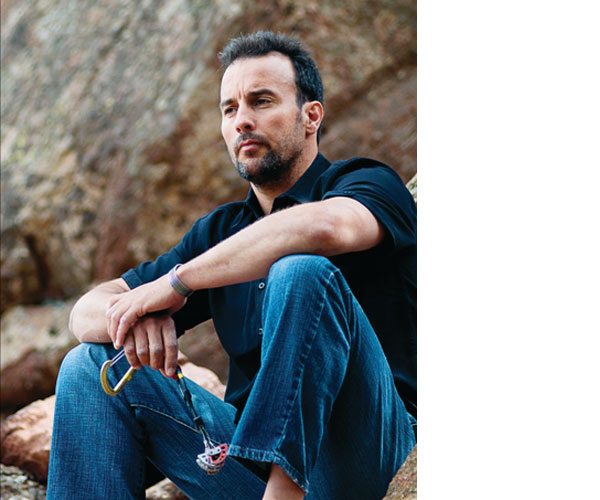 With climbing routes just minutes from his lab at the University of Colorado, Espinosa sneaks away to a crag whenever he can spare a few hours.

In the dark of night, Joaquín Maximiliano Espinosa was hugging two fellow Argentine rock climbers on a narrow ledge high above Yosemite Valley. Espinosa, ruggedly handsome with a melodic Latin accent, wasn’t showing affection for his climbing buddies, he was trying to keep them warm. They were more than halfway to the top of El Capitan, a 3,000-foot vertical rock face in Yosemite National Park, and they needed a rest.

They knew spending the night on the route was a possibility, but that was a plan B they were hoping to avoid. “We all had this Patagonian climbing attitude—roughing it, going out with very little gear,” says the HHMI early career scientist. With the aid of headlamps, they’d intended to finish the ascent without pause, but darkness and cold were taking a toll, so they stopped on a ledge under a protective alcove. “We had one sleeping bag for the three of us so we just cuddled there for a few hours and then kept on climbing,” he says. They eventually reached the summit and have returned to Yosemite twice since that trip in 2007 to tackle other climbing routes.

Rock climbing, like science, requires endurance and, often, an alternative plan, says Espinosa. “Some of the research projects that we’re doing seem monumental at first—like standing at the base of El Cap looking up. You think there’s no way we can do this. But then you start and you just keep going, and maybe you have to adjust your plans as you go, but eventually you finish.”

With climbing routes just minutes from his lab at the University of Colorado, Espinosa sneaks away to a crag whenever he can spare a few hours. Since moving to Boulder, a rock climbing mecca, five and a half years ago, Espinosa has expanded his climbing résumé to include El Capitan and Half Dome in Yosemite, numerous routes in the Rocky Mountain National Park, and Cerro Mocho in Patagonia, a mountainous region in South America’s southern tip renowned for its picturesque and difficult climbing.

While Patagonia’s rugged climbs might seem the riskiest, Espinosa’s most serious injury happened much closer to home. Last year, he broke his leg in an accident at Eldorado Canyon outside of Boulder. He says it was a careless rappelling mishap on familiar terrain, but the incident was a wake-up call. “I gained a lot of perspective after the accident,” he says. “Climbing is very therapeutic for me, perhaps the only activity that can create a mental blank slate after weeks of thinking of nothing but experiments. But you are always only one mistake away from your last climb.”

He has reasons to exercise extra caution—his twin four year-old daughters, whose names, Azul and Paloma, are tattooed on the inside of each forearm. Though he doesn’t take his daughters climbing—yet—he’s built them a climbing cave in the basement.

As a parent, he’s become more cautious, and in the eight months of rehab that followed his accident, Espinosa gave a lot of thought to the dangers of climbing. In the end, he decided that it is worth the risk. “It’s a beautiful activity that I cannot do without—it gives me sanity and friendships,” he says. “When properly done, it has a rare purity. It’s just you and nature, with no buffer in between.”