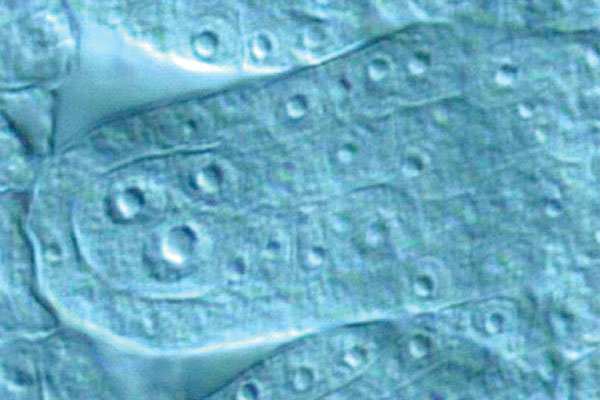 A way to switch plants’ reproductive programs could help farmers.

The shipments of seeds that farms rely on at the beginning of each growing season could soon be a relic of the past. Scientists have discovered how to coax plants to clone themselves by altering their reproductive methods.

Most plants—including major food crops like corn—create seeds by mixing genetic material from male and female cells. Offspring are unique, an unfortunate fact for farmers who want every generation of plants to have the same optimized characteristics. To ensure that sameness, farmers buy quality-controlled seeds rather than rely on the plants’ hit-or-miss approach. But many wild plants reproduce in a different way, called apomixis. They produce seeds that, instead of having a random mix of genes, contain an exact copy of their own genome.

HHMI international research scholar Jean-Philippe Vielle-Calzada wanted to know which genes and molecules distinguished apomictic plants from their sexually-reproducing relatives, and whether one type of plant could be coaxed to behave like the other. He focused his research on Arabidopsis thaliana, a flowering mustard plant that reproduces sexually.

Vielle-Calzada’s lab group, at the Center for Research and Advanced Studies of the National Polytechnic Institute in Mexico, screened Arabidopsis for genes with high activity in the reproductive structures, or ovules, of the plant. One gene jumped out: Argonaute 9, one of ten Argonaute genes in the mustard plant. While Argonaute proteins control gene expression across the whole plant, Argonaute 9 is only found in the ovules, the researchers found.

When they turned off the gene, the researchers were in for a surprise. The Arabidopsis ovules started producing cells that are precursors to seeds and usually contain a mix of genes. But these instead had clones of their own genetic material—just as apomictic plants do.

“For the first time, we have a hint of where to look to induce this phenomenon in sexual plants,” says Vielle-Calzada.

The scientists hypothesize that turning off Argonaute 9 in other plants will have the same effect. They continue to study why this gene so drastically changes the reproduction program of Arabidopsis and they want to know what other molecules are involved—for example, what genes Argonaute 9 helps to repress.