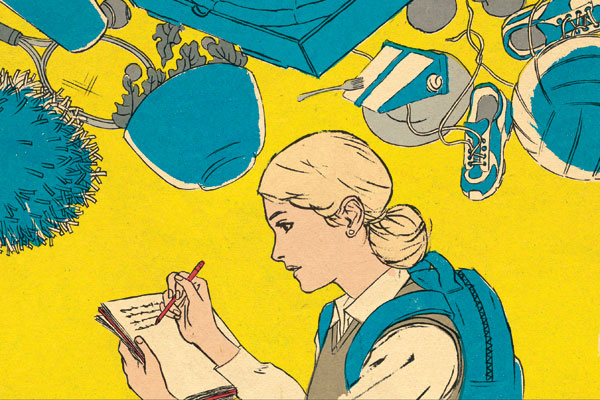 A West Virginia program pulls students into science by teaching them about the health problems in their own community.

On a cold morning in late January, terrified teenagers arrived one by one in the health clinic waiting room in Welch, West Virginia. They were there to have blood drawn for a cholesterol test. Some were crying. “I said, ‘Suck it UP!’” says teacher Lori Bishop, glaring over her glasses. “Just go back there and close your eyes!”

Bishop, an English teacher at Mount View High School, which shares a building with the clinic, says she wasn’t being mean for the heck of it. The students had chosen to become subjects in their own research project on cholesterol. Bishop and her science teacher husband, Bob, run one of the state’s 80 Health Sciences and Technology Academy (HSTA) clubs. HSTA is an HHMI-funded program to get West Virginia high schoolers excited about science and college. The program focuses on the major health problems of West Virginia: diabetes and obesity. Meanwhile, the students’ research has clarified just how common obesity is in the state.

The Bishops have a reputation for coming up with creative projects for their students. Last year, the couple joined Weight Watchers and experimented with ways to modify family recipes. “So we said, ‘Why don’t we try to do something like this with the kids?’” They organized the club’s project around nutrition. Students brought family recipes from home and devised ways to make them healthier—for example by substituting skim milk for whole.

For this year’s project, the Bishops dreamed up a plan to have the 20 students in the program monitor their cholesterol levels and look for changes related to activity and what they ate. They arranged to have the kids’ blood tested three times—in January, February, and March—as they boosted their exercise.

Before the first test, Lori Bishop remembers some of the students telling her they were thinking, “oh, the chubby kids are going to have the bad cholesterol.” But the worst cholesterol level in the class turned out to belong to a thin junior. “She might have gone years before she had her cholesterol checked. When we sent the first set of results home, her mother immediately took her to a doctor.”

Between the first and second tests, however, nature changed their plans. Harsh winter storms closed local schools for 10 days. The blood test was delayed.

On a bright note, the students were much calmer about the blood draw the second time around. But for many, cholesterol levels rose. “My cholesterol went up,” says ninth-grader Jenna Muncy. “The reason why is, it was snowing and I didn’t get out.” Lori Bishop agrees: “They were just sitting around eating junk, watching TV, and playing video games.”

Before the final blood test, the students got busy. “We had them do as much exercise as we could,” says Bob Bishop. The club met two or three times a week. On nice days, they walked circles around the outside of the school; in bad weather, they walked the halls. It worked. By the third test, in March, most had lower cholesterol. The study also showed that the athletes had an advantage.

“My cholesterol never went high or low because I stayed in sports. I do cheerleading, volleyball, tennis, and all that stuff,” says junior Joanna Bailey. Like many people in this rural county, Joanna’s parents have diabetes, so the family also eats carefully, says her mother, Patsy Bailey.

This year, the Baileys and other parents were the subjects of a research project carried out by HSTA students across the state. Students surveyed their families—mostly parents, but also aunts, uncles, and grandparents—about their health, particularly obesity and diabetes.

Bob Branch, a pharmacologist at the University of Pittsburgh, organized the survey. In 2007, Ann Chester, director of HSTA, invited him to teach a week-long summer program on clinical trials to HSTA students, but he was worried about boring his teenage charges.

“I asked the kids, rather than just me telling you how to do things, would you like to do it yourself? The response was an enthusiastic ‘yes,’” he says. They designed the study together and, as in any serious clinical study, they got institutional review board approval from West Virginia University. Every student who administers the survey takes online training on research ethics. To date, hundreds of high schoolers, including the teens in Welch, have taken the surveys home.

The survey helps scientists learn about a particular slice of the state population, Branch says. “These are really the most rural communities, up the little valleys—some of the poorest of West Virginia,” he says. Among the people surveyed in an earlier year, half the adults were obese. Those results were published October 2009 in Clinical and Translational Science in an article by Branch and Chester about having adolescents carry out community research while inspiring them to go into science careers.

Interestingly, a statewide study, conducted at the same time by the U.S. Centers for Disease Control and Prevention, found that only 31 percent of West Virginia adults are obese. That suggests to Branch that HSTA, which is aimed at students who are low income, African American, or the first in their family to attend college, may be reaching a particularly unhealthy slice of the population.

The HSTA program has had great success inspiring high schoolers to go to college. While only 58 percent of high school graduates in West Virginia go to college, Chester says, 97 percent of HSTA students do—thanks in part to a state program that waives tuition and fees for students who finish the program. And more than half of HSTA students who graduate from college go into careers in health and science.

The Bishops and Branch hope it does even more: they’d like students all over West Virginia to carry home lessons about healthy eating and healthy living as a step toward improving the whole community’s health. “We’re trying to make a difference in their lives,” Lori Bishop says. “The way they eat and the way they look at food.”