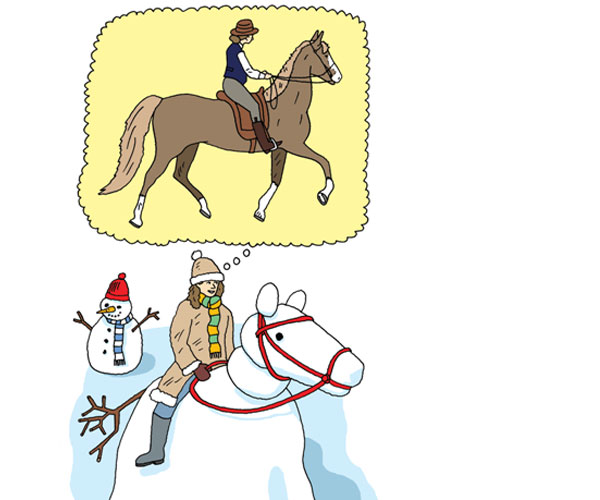 Nancy Moreno, a biologist at Baylor College of Medicine, used to build horses out of snow when she was little. Now she competes in 8 to 10 horse shows annually.

It’s early spring, and horse trailers from 27 states fill the sprawling parking lot at the Great Southwest Equestrian Center in Katy, Texas. More than 1,600 horses are in town for the nation’s oldest horse show, the Pin Oak Charity Horse Show .

Likely Suspect, a brown American Saddlebred with a black mane and tail, is there. Wearing a saddle and bridle that glitter with silver, he’s ready to compete in the championship for western-style horses. Likely Suspect comes from nearby Houston, with his owner, Nancy Moreno, a biologist at Baylor College of Medicine. Moreno directs an HHMI-funded program that creates partnerships between elementary school teachers and early career researchers.

Today, Moreno wears a black, sequined vest and cowboy hat as she and Likely Suspect await their cue to enter the 4,000-seat arena. The bugle sounds, and “you come through a chute on your horse into a huge lighted arena,” says Moreno. “You feel a blast of cold air as you enter, and your horse comes to life. It’s thrilling.”

Moreno will compete in three events with Likely Suspect and two with Jigsaw Johnny. (Her third show horse, It’s East Wing, stayed home.) Moreno’s horses are American Saddlebreds; she loves the breed. “American Saddlebreds are very exciting horses in the ring. They’re these powerful high-stepping horses, and they look like they’d be just impossible to control.” In fact, she says, Saddlebreds are versatile and eager to please. “It’s remarkable how hard a horse will try to do what it’s being asked to do. You feel a bit emotional about your horse’s effort. It’s a 1,000- to 1,200-pound animal. Why will they try so hard for us?”

Moreno nearly missed out on the equestrian world. Growing up in upper Michigan, she built life-sized horses out of snow but rarely rode real ones. Her connection to horses was mostly imaginary: “I read all the horse books multiple times: Misty of Chincoteague, Black Beauty, you name it. I was one of those horse-deprived children.” So, when Moreno’s daughter, Helena, asked for riding lessons at age 9, her mother decided to join her. They found a stable in the Houston phonebook and stumbled upon the Saddlebred breed. That was 20 years ago.

Helena doesn’t ride much anymore, but Moreno competes in 8 to 10 shows annually. She has filled a dresser with award ribbons. At the 2010 Pin Oak, Likely Suspect won second place for Saddlebreds in the western division, and Jigsaw Johnny won first place for the breed in pleasure driving, an event in which Moreno drove Johnny from a two-wheeled cart. The ringmaster helped place a striped blue, red, and yellow grand champion sash around the horse’s neck, and Moreno drove Johnny once more around the ring. The horse always senses that he has won, she says.

Moreno feels elated, too. “There are very few times in life when you get to take a victory pass.”

Ed. note: Nancy Moreno's horses were involved in a serious truck and trailer fire in June, on the way to a show. Likely Suspect was severely burned and did not recover. Her other two horses escaped injury.