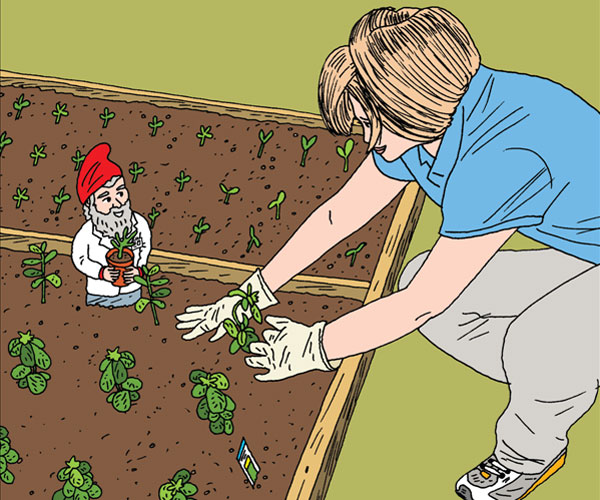 The Garden That Science Built
by Mary Beth Gardiner

It’s July, high noon, and the sun is at its peak. Most people, given a choice, are somewhere keeping cool—inside, where it’s air conditioned, or maybe under a shade tree. But at the edge of Janelia Farm Research Campus, near the delivery gate, a handful of people bend over in the hot glare, weeding and watering a burgeoning organic vegetable garden.

The oasis of leafy, fruit-laden plants stands in stark contrast to the hard-scrabble, baked earth just outside its fence line. Strewn with small boulders and metal scrap, the area used to be a dumping ground for construction debris. The dramatic transformation has taken time, sweat, muscle—and a dose of scientific ingenuity.

“Last year felt like Jamestown,” says Kristen Nyce, an administrative assistant at Janelia who helped start the community garden. “I’m just glad we didn’t have to live off it.”

What a difference a year makes. With its neatly bordered plots, irrigation system, and compost bin in place, the garden is bursting with red tomatoes, yellow squash, and green-striped melons shining against rich brown mulch.

The idea for a community garden first came to Nyce and fellow Janelian Frank Midgley in 2008, during a conversation around lunch. Three co-workers joined them in submitting a proposal to Janelia administrators.

“They were a wonderful sounding board and very supportive,” says Nyce. Since then, Janelia has donated fencing, lumber, and other essential materials.

Dubbing their group “The Garden Club,” the organizers have recruited 30 or so Janelia small-scale farmers, with expertise ranging from novice to certified Master Gardener, to take part in the communal effort. A one-time initiation fee of $20 goes toward the 1500-gallon water tank that feeds the irrigation system as well as chicken wire and tools. An additional $10 lays claim to a 4×4-foot plot for one year—the organizers hope to lower that by half next year, as new members come on board.

“It’s amazing what you can get out of these plots,” says Nyce.

Susan Michael, a histologist who grew up in the country, has four plots this year. “It’s kind of a compulsion,” she says. “Once you start, you can’t stop.” This season, she added gladiolas to the mix. “Gotta have a little food for the soul.”

Water is a primary concern to the gardeners. Last summer’s low rainfall had them organizing bucket brigades to carry water from the main building. Midgley, a software engineer at Janelia, designed the gravity-flow irrigation system that now keeps the garden lush, despite this month’s triple-digit temperatures. He also designed and built the compost bin, which receives a daily delivery of produce scraps from the Janelia Farm kitchen.

Midgley says he’s met people out in the garden that he wouldn’t have met inside the building. “It’s hard to get people to break away from their intense work,” he says.

For Susan Michael, it’s a real highlight. “You work in the sciences, it’s kind of sterile. So it’s nice to muck around in the dirt and create some little miracles.”