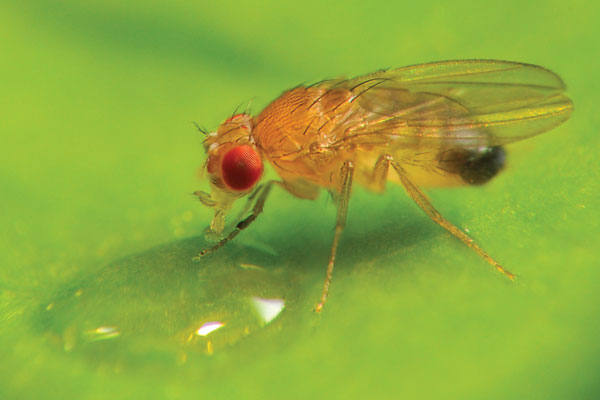 A fruit fly sucks up water with its narrow feeding appendage.
photograph courtesy of the Scott Lab

Scientists identify a gene that sends flies to the water bowl.

Camels sport humps on their backs to store it and geese fly thousands of miles in search of it. The need for water is ubiquitous, yet the underlying genes that motivate animals to seek it have remained mysterious.

Now, Kristin Scott, an HHMI early career scientist at the University of California, Berkeley, has uncovered a gene, called pickpocket 28 (ppk28), that regulates fruit flies’ ability to detect water and how much time they spend drinking.

Scott and her team set out to identify genes involved in taste. They first compared genes expressed in the feeding appendages of flies that lacked taste neurons with those in normal flies. When they narrowed in on ion channels that were enriched in taste tissue, they found the ppk28 gene.

The researchers then measured the activity of neurons stimulated with taste compounds by imaging changes in a fluorescently labeled calcium-sensitive ion channel and by inserting tiny electrodes into the flies’ taste-sensing bristles. They found that neurons expressing ppk28 activated strongly when flies tasted water, but their activity diminished when flies tasted other substances, such as sugars, bitter compounds, salts, and acids.

Moreover, neurons did not respond when flies without ppk28 drank water. And whereas normal flies drank water for about 10 seconds, mutant flies sipped for only 3 seconds. When researchers reintroduced the gene into mutant flies, their taste neurons fired when they drank water, and they went on to drink it for 12 seconds.

The results indicate that both ppk28 and taste neurons are necessary for sensing and consuming water. To confirm the role of the gene in detecting water, Scott and her team expressed ppk28 in neurons normally activated only when flies taste something bitter. Remarkably, these neurons began firing when flies drank water. The findings were published May 6, 2010, in Nature.

Because the class of proteins is found in many organisms, Scott believes ppk28 plays a role in water consumption in other animals, perhaps even humans. In future studies, she plans to investigate how water activates ion channels and how internal drives, such as hunger and thirst, affect the detection and consumption of water and sugar.