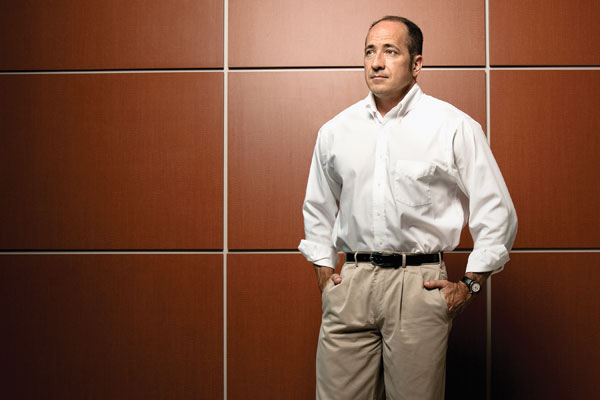 If the drug works in dogs with an aggressive form of MD, Jeffery Molkentin is hopeful that it will
help children as well.
photograph by Jonathan Willis

Death Be Not Programmed
by John Fleischman

The ordered chain of events that is cell necrosis can be blocked to curtail the effects of some crippling diseases.

Necrosis is not subtle. One of the body’s natural forms of cell death, it can be likened to a ship hitting an iceberg, exploding the boiler, and capsizing, all at once. Cell necrosis occurs as a result of sudden death by trauma, by pathogenic infection, or by the proverbial last straw laid on accumulated damage.

Underneath all that seeming chaos, however, cell necrosis is actually an ordered chain of steps, says Jeffery Molkentin, an HHMI investigator at Cincinnati Children’s Hospital Medical Center. Moreover, Molkentin and others are crafting treatments for several “untreatable” degenerative diseases by uncoupling key steps that drive necrosis forward.

Although he made his first discovery in the field of necrosis while studying damaged heart cells, Molkentin is focusing on Duchenne muscular dystrophy (MD). The most common form of the genetic muscle-wasting disease affects one in every 3,500 males born in the United States; boys with Duchenne MD typically live only into their late teens and early 20s.

Molkentin has used engineered transgenic mice to show how the relentless muscle damage that drives Duchenne MD can be interrupted. Now, he has a “proof of principle” drug study underway in Brazil, using a small colony of golden retriever dogs that spontaneously develop an aggressive form of MD similar to human Duchenne MD. The drug is related to the immune suppressant cyclosporine, but instead of targeting the immune system it blocks a crucial step in the cell necrosis pathway in skeletal muscles, according to Molkentin.

This drug does not correct the genetic defect that drives MD—mistakes in a giant muscle-connecting protein called dystrophin—so it is no cure for the disease. But stopping cell necrosis could curtail MD’s crippling effects. Though results are not in, Molkentin believes that “if this drug fixes the golden retrievers, it’s going to work in kids.”

Molkentin came to the idea of blocking cell necrosis through his earlier studies of cardiac hypertrophy, the enlargement of heart muscle cells, or cardiomyocytes, that follows an ischemic event—a short cut-off of blood to the heart. Cardiomyocytes can’t renew themselves, so cellular necrosis after ischemia leads to heart dysfunction and failure. The tipping point in the cardiomyocyte is the sudden swelling of mitochondria, the cell’s internal power plants. Excess calcium floods in through a regulated pore, finally bursting the organelles, blacking out energy production and spewing toxic proteins.

It was startling, says Molkentin, that mouse cardiomyocytes with their cyclophilin D neutralized were protected from mitochondrial swelling and death due to calcium overload. There was something here beyond a vulnerable protein, he realized. Cyclophilin D appears to be one player in a network of proteins that create an ordered process that he calls programmed cell necrosis.

These mice that lack the gene producing laminin 2 have full-blown MD, are dramatically undersized, barely move, and are close to death.

To explore programmed necrosis in a living animal, Molkentin created a mouse model lacking the gene Ppif, which produces cyclophilin D. The mouse sailed through laboratory-induced ischemic events, prompting Molkentin to wonder if cell necrosis could be blocked in a genetic disease like MD, where damage builds up over time.

The gene for human Duchenne MD, identified in 1986, produces a defective version of dystrophin, which, along with its helper proteins, normally passes through the sarcolemma, the membrane sheath around skeletal muscle fibers.

In Duchenne MD, defective dystrophin causes the sarcolemma to tear. Calcium pours through the torn membrane and into the skeletal muscle cells. Unable to tolerate the extra calcium, the cells’ mitochondria swell and burst. Cell necrosis then spreads from cell to cell through the long bundles of skeletal muscle fibers.

Because of this mitochondrial link, Molkentin decided to crossbreed his cyclophilin D-null mouse with mice carrying engineered genetic defects that model MD.

In his office at Cincinnati Children’s, Molkentin pulls up a video on his computer. “Look here,” he says. “These mice that lack the gene producing laminin 2 have full-blown MD, are dramatically undersized, barely move, and are close to death.” Molkentin’s double-null mouse—null for laminin 2 and cyclophilin D—has an awkward gait, but it’s mobile and lives well into adulthood. The double-null mouse is living with MD because cell necrosis is stalled.

But mice are mice, Molkentin concedes. If the drug being tested in Brazil over the next year can do this for the golden retrievers, he says, there will be good reason to move toward clinical trials with children.

FOR MORE INFORMATION: Read about HHMI investigator Kevin Campbell’s efforts to identify the function of the tight complex of proteins bound up with dystrophin (www.hhmi.org/research/investigators/campbell.html).