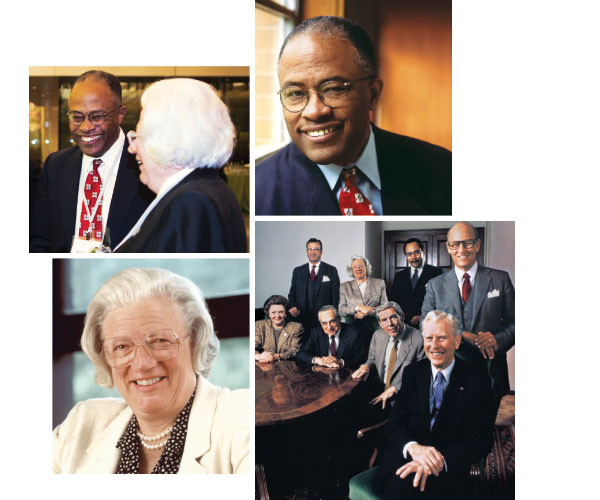 Change in Leadership of HHMI Trustees

Schmoke, 60, is an attorney who has dedicated much of his life to public service at all levels of government, including three terms as mayor of Baltimore. One of 11 Trustees of the Institute, he was elected in 2005 and has served as a member of the Executive Committee as well as chair of the Audit and Compensation Committee.

A 1971 graduate of Yale University, Schmoke attended Oxford University as a Rhodes Scholar and received his law degree in 1976 from Harvard University. After a year in private practice, he joined President Jimmy Carter’s White House domestic policy staff in 1977 and then returned to his native city of Baltimore to become an assistant U.S. Attorney in 1978. Schmoke was elected State’s Attorney for Baltimore City in 1982.

Schmoke came to national prominence in 1987 when he became the first African American to be elected mayor of Baltimore. During three terms in office, he focused on improving the city’s school system and on broad economic development programs, with an emphasis on expanding home ownership and job opportunities.

Schmoke joined the law firm of Wilmer, Cutler, & Pickering in 1999 after declining to seek a fourth term as mayor. He became dean of the Howard University School of Law in Washington, D.C., in 2002. A respected and thoughtful advisor to a number of educational and other organizations, Schmoke recently served as a mediator between the District of Columbia school system and the Washington Teachers’ Union. He is a trustee of the Carnegie Corporation of New York, a director of the Children’s Health Forum, and a member of the Council on Foreign Relations. He is also a director of Legg Mason and The McGraw-Hill Companies. Schmoke previously served as senior fellow of the Yale Corporation, the university's governing body, and as a trustee of Tuskegee University.

Hanna Gray was named a Trustee of the Institute in 1984 by the Delaware Court of Chancery, joining seven distinguished business and academic leaders in rebuilding the Institute after the death of its founder. She succeeded the late Irving S. Shapiro as chairman in 1997 and will continue to serve as a Trustee.

In addition to the Institute, Gray has served as a director or trustee of some of the nation’s most well-known organizations: the Harvard Corporation, the Yale Corporation, the Smithsonian Institution, the Andrew W. Mellon Foundation, the Council on Foreign Relations, the Mayo Clinic, the Brookings Institution, and Bryn Mawr College.