Jonathan Abraham – From Trainee to Scientist 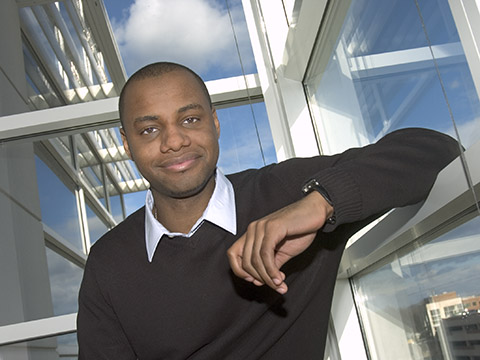 When Jonathan Abraham’s Haitian family moved from Canada to Queens, NY, he was shocked to hear some of his high school classmates blame Haitians for the AIDS epidemic. Even more surprising to him was the number of low-income communities in the United States with rates of infant mortality, TB, and HIV infection comparable to those in developing countries.

Since then, Abraham has focused on two career goals: doing research on infectious diseases and educating people about those diseases.

As an undergraduate at Harvard College, Abraham participated in HHMI’s Exceptional Research Opportunities Program (EXROP), which gives outstanding students from groups underrepresented in science the chance to do laboratory research with HHMI investigators and professors. Abraham worked with HHMI Investigator Stephen C. Harrison, a structural biologist at Harvard. Under Harrison’s guidance, Abraham tried to design drugs to prevent Ebola virus from entering cells.

Within a year of their work on Machupo virus, Abraham, Harrison, and their colleagues determined the molecular structure of the transferrin receptor bound to the Machupo surface protein and published it in Nature Structural and Molecular Biology.

Abraham remained in Harrison’s lab as a postdoctoral fellow while he was a resident in internal medicine at Boston’s Brigham and Women’s Hospital, and eventually he became an instructor in chemistry and molecular pharmacology at Harvard, and a clinical and research fellow in infectious diseases at Brigham and Women’s Hospital and Massachusetts General Hospital. His current work focuses on developing antibody-based therapeutics to treat emerging viral infections.

It is critical that the nation’s scientists and university faculty reflect America’s diversity. HHMI’s Exceptional Research Opportunities Program (EXROP) places outstanding undergraduate students, nominated by HHMI science education grantees, into intensive research experiences with HHMI investigators and professors. In 10 years since the program’s inception, more than 600 students have participated. Of the EXROP alumni who have completed a baccalaureate degree, nearly half are in graduate school. The Gilliam Fellowship Program provides full support to promising doctoral students from groups traditionally underrepresented in the sciences.