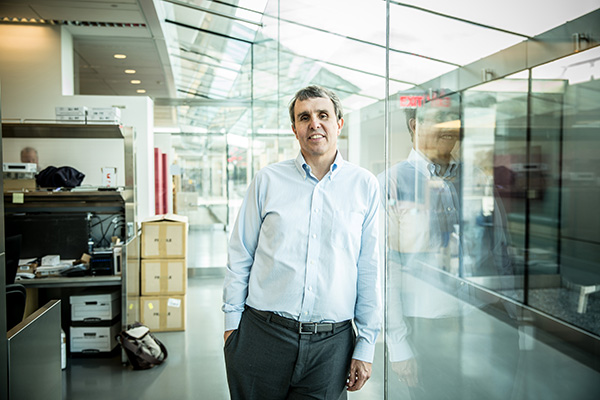 Eric Betzig’s career path has been anything but conventional. The physicist zigzagged through a variety of positions in academia and industry, ultimately landing among the original group of scientists who joined HHMI’s Janelia Research Campus in 2005.

At Janelia, Betzig creates novel optical imaging tools for molecular, cellular, and neurobiology. A pioneer in developing near-field microscopy for ultra-high-resolution optical imaging, he previously spent six years at AT&T’s Bell Laboratories. There, he was the first to image subcellular details beyond the so-called diffraction limit, which had hampered scientists’ ability to see details of proteins inside cells. Betzig and his colleagues were also the first to image single fluorescent molecules – a key methodology in modern biophysics.

Growing disillusioned with the near-field technique and academic science in general, Betzig left Bell Labs in 1994 to become vice president of R&D at his father’s machine tool company in Michigan. He spent seven years at the company, developing and then marketing a precise motion control technology for automated cutting tools. However, the technology was a commercial failure.

Unemployed, Betzig considered how best to return to scientific research without going back to work in a traditional academic lab. With his friend and former Bell Labs colleague Harald Hess, Betzig devised a simpler approach to optical imaging of cells at near-molecular resolution, termed photoactivated localization microscopy, or PALM. They paid for the R&D themselves and built the prototype in Hess’s living room in La Jolla, CA. Later, Betzig would share the 2014 Nobel Prize in Chemistry with Stefan Hell of the Max Planck Institute for Biophysical Chemistry and William Moerner of Stanford University for this work on PALM.

In 2005, Betzig became one the first group leaders at Janelia, where he and his colleagues have since developed an array of powerful microscope technologies that have improved biologists' ability to visually track the movements of cells' tiniest structures. One, called the Bessel beam plane illumination microscope, uses ultrathin pencils of light, similar to those used in supermarket barcode scanners, to rapidly image the complex three-dimensional dynamics within single living cells. Another – the lattice light sheet microscope – uses a sheet of light to capture high-resolution images of live cells, with minimal sample damage. Betzig’s most recent technology is a variation on structured illumination microscopy (SIM) that greatly improves on the speed of image acquisition, providing new capabilities to bring super-resolution microscopy to live-cell imaging.

About the Janelia Research Campus:

HHMI created Janelia, a fully HHMI-funded research facility, to host leading scientists in pursuit of long-range research projects. The campus is designed to bring together researchers from disparate disciplines. Biologists work alongside computer scientists, engineers, physicists, and chemists in an environment free of the traditional disciplinary boundaries one might encounter in academia. Research teams are small, and team leaders are actively involved in research rather than just managing it. Read more >>